Grain Growers of Canada call for rapid ratification of CUSMA

The Government’s signing of CUSMA is key to establishing certainty and growth in the North American market for Canada’s grain farmers.

OTTAWA (January 27, 2020) – Grain Growers of Canada (GGC) is urging the Government of Canada to ratify the Canada-United States-Mexico Agreement (CUSMA) as soon as possible. In doing so, Canadian Read More »

On Friday, Minister of Agriculture and Agri-Food Marie-Claude Bibeau launched the application process for a first Canadian Agricultural Youth Council. The group of young Canadians will provide advice on agriculture and agri-food issues that matter most to them – everything from sustainable agriculture, market diversification and innovation, to the digital Read More »

After much anticipation, the  BCGPA 2020-2022 Strategic Plan has been completed and adopted by the board!

Please click the link below for the highlights and a full copy of the plan.

The program will pair new farmers with some of the veterans of small scale agriculture to cultivate the skills for running ecologically sustainable and financially viable businesses. Mentors will work to help them analyze their operations and chart a course to move Read More »

Are you looking for additional learning opportunities this winter? If so, you might be interested in checking out the free webinars provided by The Beef Cattle Research Council. There are 8 webinars planned throughout the winter, as well as a back catalogue of past webinars that can be viewed at Read More » 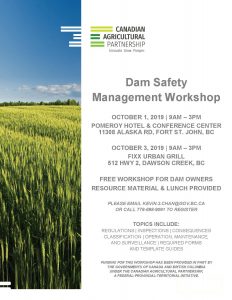 Dam Safety Management Workshops are being held in the Peace Region at the start of October. A workshop will be held in Fort St. John on October Read More »

The Government of British Columbia has announced a Food Security Task Force and is looking for public input.  The Task Force is appointed by the Premier to provide strategic advice and recommendations for how agriculture technology and innovation can be developed, grown and broadly adopted to support food security across Read More »